After hearing about the death of Adam Yauch I was moved to write something about my own memories of the Beastie Boys.

I was 1o years old when License to Ill was released in England and all I knew of its existence was the news reports of this wild rap group from America provoking violence and mayhem across the world.  There were the spate of thefts of VW signs from cars, the women in the cages and giant inflatable penises on stage.  My 10 year-old brain was still being manipulated by my parents so I only heard the bad news about this raucous band from New York.

So 3 years later when Paul’s Boutique came out to much less fanfare and drama, it passed me by.  I was at high school and had my own problems to worry about. Music wasn’t yet the vital part of my life that it became in my mid-teens.  I was around 16 when I remember buying a second-hand vinyl copy of Paul’s Boutique from a record exchange store near the market in Southport.  The cover was a little frayed at the edges but the gatefold sleeve with the panoramic view of Brooklyn was still clear.  It looked like my imagination of America.  Exotic, unusual and familiar at the same time.  The record had that smell that anyone who has ever been into a second-hand record or book store will instantly recognise. 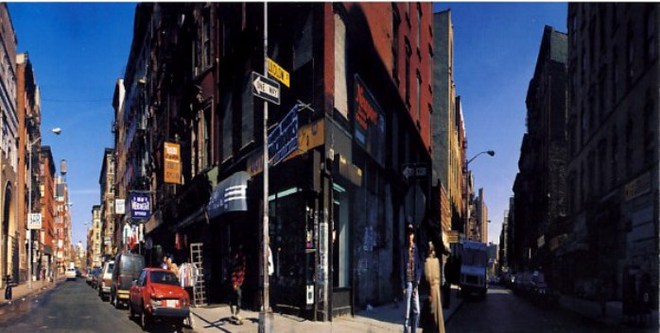 The sound of the record was also new for me, layers of samples and nasal-whining. By 1992 I had discovered the rest of the Beastie’s back catalogue and was primed and ready for their new album, Check Your Head.  This was a different album in many ways from the first two.  Playing their own instruments, and seriously reducing the number of samples used on Paul’s Boutique, gave the songs a stripped-down, for-real sound.  At this time I was discovering English and US punk, and some of the funk-driven rap coming from America.  Check Your Head was a perfect amalgam of these styles and I loved it immediately.

Later that year the Beastie’s toured England with the Rollins Band, Henry’s post-Black Flag outfit and I was lucky enough to get a ticket.  I had been to a few live shows before but a punk and hip-hop show like this was the first time I saw something so powerful and vital.

They were due to play Manchester Academy on Oxford Road but the show was moved to the much smaller venue in the Students’ Union next door, the (incredible sounding) rumour was that they hadn’t sold enough tickets to fill the Academy venue.  Nevertheless the show went on in the Union.  I went with a friend and the older brother of another friend.  We made the drive from rural Lancashire to the big city and listened to the Beastie’s on the way.  We were trying to decide which of the two bands we were most excited about seeing, and to be honest I was more looking forward to Henry Rollins.  I was a Black Flag fan, and was really excited to see the enigma that is Mr Rollins, doing his thing with a new band.

The Beastie’s played first that night and we were summoned from the bar by the deep bass from the opening of Paul’s on a loop.  Then out they came, and rocked it.  They moved from their call-and-response hip-hop with a dj to playing their own instruments on a hardcore punk section.  I got a hand-slap form Ad-Rock and loved every minute of the whole show.

Henry played last and stalked the stage, growling into the microphone with muscles rippling.  Henry Rollins is a performer like no other, and the energy created in the room was visceral.

When it finished we were sweaty, exhausted and exhilarated.

This show was my first experience of America, up-close and personal. Gritty and real. That is what the Beastie’s mean to me.  MCA will be missed.