Professional footballers may still be able to inspire us or brighten our days with their skill but are they heroic?  Is it possible or even sensible to raise a footballer to hero status?

When I was a young child I had a poster on my bedroom wall.  It was of Kevin Keegan balancing a ball on the back of his massive bubble perm.  Keegan was wearing an Admiral tracksuit top and a pair of shorts so it must have been from the early 80s.  I was too young to buy the poster myself so it was probably bought for me and placed there by my father.  As children our fathers are our heroes and they also choose our heroes for us.  I became a Liverpool fan because of my father, there was no other option.  Keegan had been Liverpool’s best player and so he was chosen to be my hero.  I don’t know what happened to the poster, and I don’t know what happened to Keegan either.  His hero status rapidly diminished when he retired from playing.  He was never able to recreate his playing success as a manager and will be remembered for his ‘rant‘ at Ferguson, slumping on the hoardings at Anfield and tearfully resigning from England in the bathroom.  Our heroes rarely live up to our image of them, and rarely is it their fault.

As I grew older I was able to choose my own footballing heroes, progressing through Kenny Dalglish and Ian Rush on to John Barnes.  Barnes became a hero for other reasons, and a symbol of the fight for racial equality in 1980s Britain.  The iconic photo of him backheeling a banana off the pitch at Goodison Park made him a hero for transcending the idiotic racism he was subjected to, a racism born out of jealousy.  Barnes was the most talented player of his generation, far more so (and more successful) than the perpetually feted yet terminally flawed Paul Gascoigne but is rarely recognised as such.  What Barnes had that Gazza didn’t were the work ethic to go along with his talent, and the companionship of players able to profit from and facilitate Barnes’ considerable ability.  What he didn’t have was the self-destructive streak that we in Britain require of our most favoured, fragile footballing heroes.  George Best being the most obvious example.

Now though looking up at footballers as potential heroes seems slightly ridiculous.  I confess to being proud of the way the younger Steven Gerrard could take hold of a game of football and impose his ferocious will on it.  Not with the violence of a Roy Keane but with the sheer drive and energy of a Patrick Vieira, with some explosive finishing attached.  When Gerrard retires his highlights reel of long-range barnstorming strikes will stand alongside that of any other player you care to mention.  In his autobiography though he talks of his many personal struggles with self-belief and aside from his family he has few interests away from football.  Gerrard is an inspiration on the pitch but all too human off it. 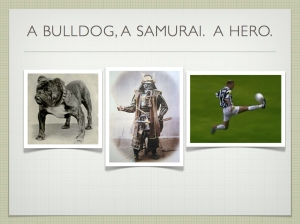 Instead of Gerrard though Zinedine Zidane is a worthier candidate for a footballing hero for our modern times.  He seemed to move to a different, more subtle rhythm than other players, always ready to dance, pirouette and feint while maintaining complete mastery over the football, his body, his emotions and the game in general.  Yet the honour of his family was more important than his legacy, and Materazzi’s insult could not go unpunished.  Watching Zidane play is like watching a cat play with a mouse, all feline slinkiness and style combined with a lethal killer instinct, then when the coup de grace is delivered…  Samurai-emptiness.  Zidane has moved on.

Ask an English person to name a hero and many will say Winston Churchill.  Most English people are aware of Churchill’s speech, many have it burned into their consciousness.  Even if we have never heard it in its entirety, our hair stands on end as Churchill gruffly announces to all who would invade our England that our island nation shall never surrender.  The wars of the past had a clear division of bad and good.  But our current wars are more ambiguous, we are not battling the forces of evil, instead we fight for gain and plunder.  And now football, in Europe at least, stands in the place of military conflict.  It is different in the United States but for Europeans our heroic images come from the football fields rather than the Elysian Fields of war. 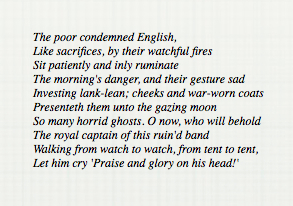 The word ‘hero’ has a Greek root which originally meant ‘protector’ or ‘defender’.  For English people this resonates loudly.  For any fan of the England national team there are a few instances where the protectors have become heroes.  For my father’s generation Bobby Moore stands out, with his sublime tackle on Jairzinho in the 1970 World Cup finals.

The English heroes of my generation are Terry Butcher and Paul Ince wrapped in blood-soaked bandages, fresh from defying the respective Swedish and Italian incursions into English territory.  Both those games finished 0-0.  Stuart Pierce screaming and beating his chest after securing his redemption through a successful penalty kick against Spain in Euro ’96 is another enduring image.  Another 0-0 game.

For those of us who reject the warrior metaphors, or want to dream of something more than dogged defence, these kind of heroes are ultimately unsatisfying.  I can admire their fighting spirit, but at the end of the battle, what?  A bloody shirt and early exit from the World Cup.  And would I want either of these defenders of England to guide the way I live my life?  If I were a professional footballer or soldier then maybe, but I’m not.

But still the media and corporations use our ‘heroic’ history to sell us things, to make us feel like we are defending England against the rest of the world.  This advert pulls all our English heart strings with its mythic images of former heroes.  After watching that we would fight anyone.  Or maybe just go and get another (Danish) beer and defiantly scream at the TV.

In Richard Ben Kramer’s biography of Joe DiMaggio he talks of the media’s ‘hero machine’.  He describes how the sporting press created a mythical being out of a person who, through combination of hard work and talent, was good at baseball.  They provided him with a god-like countenance and told tales of his miracles.  His relationship with Marilyn Monroe added further fuel to the fire and these fragile characters were transformed into Royalty, so that we, the people, may dream.

‘Joe and Marilyn had one thing in common.  They may have been the only two people in the country, at that moment, who could understand each other.  Because both were living inside the vast personages that the hero machine created for them.  And inside these personages – those enormous idols for the nation – these two, Marilyn and Joe, were only small and struggling, fearful to be seen.  And alone – always.’

The hero machine in England has been gamely rallying around England’s brave captain John Terry after he admitted using a racial slur against Anton Ferdinand.  It seems that Terry can’t be racist as he shouted it instead of whispering it so everyone should go about their business and leave JT alone.  The hero machine tells us racism happens all the time in sports and people who complain don’t understand how it is out there in the trenches, defending Chelsea and England.

Despite the best turd polishing efforts of the English sporting press it is difficult to imagine anyone regarding John Terry as a hero.  Possibly only the kind of person who does this.  England and Chelsea captain he may be, but when he retires he will be remembered for sleeping with his teammates’ girlfriend and falling on his arse in the Champions League final penalty shoot-out.

John Terry appears to be suffering a fate that doesn’t match the myth, the same with many of our heroes. Joe and Marilyn ultimately met ends that jar with their legend.  We said goodbye to George Best on a cold winter’s afternoon in Belfast, a borrowed liver not enough to save him from himself.  Paul Gascoigne is ‘troubled‘.  Stuart Pierce is literally Fabio Capello’s punchbag.  Paul Ince and John Barnes are both unable to break through the managerial glass ceiling.  Bobbies Moore and Robson now only inspire us in ghostly commercial appearances.

Is it wrong to expect more from footballers?  Does the hero machine provide us with paper tigers instead of wildcats?  After we leave childhood is it healthy to attempt to find heroes outside of ourselves?  I recently wrote a series of articles on players who also had a political dimension.  Either from a deep commitment to the communities of which they were a product or through a stylistic or academic choice, these players used their fame to highlight other issues outside of football.  Whether it be left-wing politics, nationalist pride or a rebellious raspberry in the direction of the ‘establishment’  they have all stood out for reasons other than football.  Perhaps this is an area where footballing heroism is not dead.  Yet this is noticeably rare in footballers, and I suspect likely to become even more rare as the neoliberalisation of the beautiful game becomes further entrenched.  Players like this are heroes for some fans but less so for the game’s controllers.  And for other supporters I suspect the words of Wigan Athletic owner Dave Whelan on the recent race row hold more value when he said, ‘The game is a game, the game is a football game…  We’re all equal and we all play football and we should get on with it.’  In other words, forget about your colour or your politics or your personal struggle and just play the game, we aren’t interested in your battles.

Individual differences are frequently coached out of young players with a focus placed on more measurable qualities like speed and strength, while at the same time teams desperately search for absent creativity.  As Florent Malouda told L’Equipe, ‘Since my arrival in metropolitan France, I’ve erased certain traits of my character to avoid being rejected by the system, to the point where I get reproached for nonchalance even though I’m an electric battery’ (quoted in Kuper, 2011:100).  You can admire Malouda for his obvious ability and work rate, and of course the manner of his progression from French Guyana to the Kings’ Road, but he can’t be many people’s idea of a hero.  He is instead a finely tuned automaton, like the Terminator or Michael Schumacher. 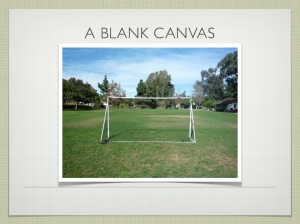 So yes maybe it is foolish to try to find a hero among the ranks of the top flight players, disappointment is the only certainty.  If all you require of a hero is the ability to play football at increasingly high speeds, with ball control and technique combined with stamina and athleticism and then conduct interviews solely in clichés, then there are potential heroes a-plenty.  But as someone to inspire you outside of the game, to promote free-thinking and cultural awareness, to be an ‘anti-hero’, sadly football is becoming the wrong place to look.

So let the hero machine do its worst, let our parents shape our childhoods, let the footballing spectacle entertain us and then be like Zidane and let it go.